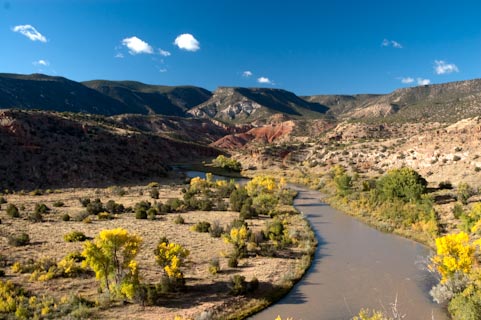 I just got back from another trip out in New Mexico and added 4000 miles to my motorcycle’s odometer.

While in NM, I did some freelance for Rosa Linda Roman’s website called New Mexicast. I shot and edited a piece on fly fishing along the Chama River with Noah Parker from Land of Enchantment Guides. It was a long 14 hour day but very enjoyable. I was surrounded by some great scenery and Noah and his friend Cha were fun company to shoot.

They caught several Rainbow Trout and released them back in the water. The piece should air on New Mexicast soon. I will post a link when it does.

After the shoot, I spent most of the rest of my visit at my old haunts in Albuquerque. I worked on logging and editing the fishing piece and contacted a few employers without much luck.

I took a day hike with my friend Alex to an old plane crash, TWA flight 260, that occurred in the mid-50s. I’m in the process of editing that video and I hope to post the hike later this week.

This is video from my May trip to Albuquerque. While in ABQ, i decided to sneak into Utah to catch some of my favorite sites. Angels Landing is a 4 to 5 hour roundtrip trek in Zion National Park. The views at the top are outstanding. This is considered the second toughest hike in Zion, next to Observation Point. I hope to be back soon.

I’ve been back from The Outer Banks of North Carolina for over a month now, but I never did post the surprisingly exciting event of the these tiny creatures.

The event took place at the Scotch Bonnet Fudge Store in Frisco, NC. There were only 4 participants in this race. Jimmy The Crab was the favorite but as you can tell from the video, Hermee nudge out the win to take the prize.