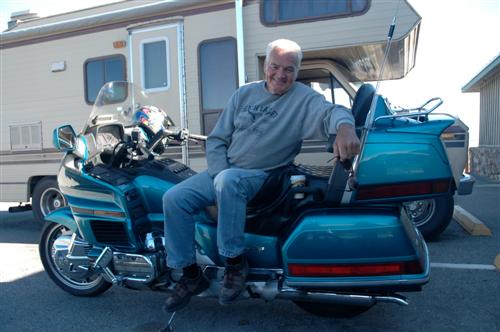 I met Les in Stovepipe Wells in Death Valley. After a much needed shower, I walked back to my bike to see Les and his Honda Goldwing parked next to me. I asked him how many miles he had on his bike and he told me 275,000 miles and this was his 14 motorcycle over the last 40 years. Right then I figured this man was worth chatting with a bit more.

Les works in Death Valley 5 months out of the year in the fall and winter. He then rides the country with his dog the rest of the year. He’s married too. Understanding wife I imagine.

He chitchatted about standard biking stuff. Places he had seen…several times over. The types of bikes he had. He had a peace and confidence about him that was to be admired. We didn’t exchange addresses or anything. He was just a friendly guy that was a pleasure to meet on my trip.