I was wary of visiting Sequoia with the bad weather up there but I am glad I did.

I planned the leave the morning of the second day I was up there but when I stopped by the visitor’s center, one of the rangers saw me and yelled, “Roads are clear throughout the park!!!” She knew I had a concern, obviously since I was on a bike. I don’t know if I mentioned but a day earlier, two motorcyclists crashed in the park because of the roads.

Well after she made such a point of telling me the roads were clear, I couldn’t leave the park. By the time I got the all clear, I didn’t have the time to ride as deep into King’s Canyon as I had hoped. (You go through Sequoia to get to KC.) I was able to make it a little ways and with the nice weather it was a good day. At the end of the day, I met with Leon and Eva again and they told me to set up camp again on their site. We had evening coffee and they offered me some soup for dinner which was good because I hadn’t eaten all day.

I didn’t take many pictures of the visit. Below is one of my favorite. 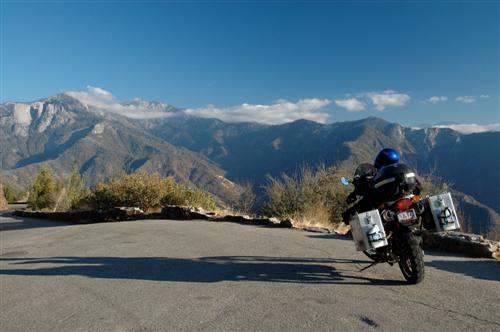